[This post will contain some stuff about the buildup to Zootopia and then some minor spoilers about the film itself, mostly in the way it handles certain themes and things but also with reference to a couple specific non-plot relevant scenes. Still, if you want to avoid hearing ANYTHING about the movie, as I did for the week or two before it, best to stop at the spoiler warning. Also, duh, the following are my own opinions only, and all images herein are copyright The Walt Disney Company 2016.]

We’ve been looking forward to this for a year and a half, I think, maybe more. Since the first concept art came out, it looked like a project that would align with the interests of a lot of furries. And the more we saw, the more positive it looked. The trailer had a fun sensibility–all the characters had personality from the get-go even without dialogue.

The more we saw, the more we hoped. The sloths in the DMV included some great humor and animation gags; further trailers and art and the official poster looked promising. Disney pushed this movie hard in unexpected ways–like advertising heavily on ESPN and tweeting on “big game” sports days with the “JUST ZOO IT” ad.

The night we went to see it–Thursday night of release, a 9:40 pm show–I was talking to one of my friends and saying that I was trying not to be too excited about it. You know, when you get to a certain age, you get let down a lot. And the stakes were high for this: a movie basically right in the wheelhouse of our fandom by the biggest name in animation. It almost felt like a test of our fandom: if even Disney can’t pull off a good furry movie, then we won’t ever be able to convince people outside the fandom that it’s worthwhile. Which is flawed thinking, of course. It’s worthwhile to us, and Disney has misfired enough times that you shouldn’t blame the source material.

And yet at the same time I wanted to let myself be excited for it. I think the last time I was this excited for a movie was for the first Harry Potter film, and even that wasn’t quite the same. This was…like “The Force Awakens” for Star Wars fans, “Fury Road” for that Mad Max fandom, only it was completely new.

And yes. One of the main characters is a fox, and he’s well done and super cute, and so that was another reason for me to be excited.

We’d seen enough to buy tickets to two shows, the Thursday night one and another down in L.A. “If it’s bad,” we said, hoping we were joking, “we’ll just put in headphones and watch the cute animals.”

You guys all know by now that it wasn’t bad.

We came out of the theater all giddy, gushing about it. For the next three days, online and in person, people would say out of nowhere, “Another thing I liked about Zootopia…” It’s got a terrific story. The script is great. The voice acting is tremendous, from the two leads all the way on down (and they have career voice actors doing some parts, names I recognize from cartoons over twenty years ago). The worldbuilding is good enough to withstand a fair bit of scrutiny. And on top of all that, it’s not just a fun story with cute animal people; it’s a story with a message that is perfectly relevant to our time, delivered with care and thought, accessible to kids but not dumbed down for them. 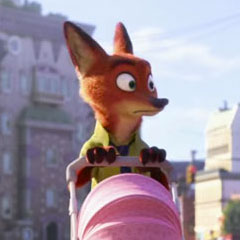 For years, furry writers have been talking about furry fiction as an excellent vehicle to discuss issues of prejudice and discrimination. Zootopia does this in all the right ways. At its best, this kind of allegorical story doesn’t just substitute in species for races or religions; it creates a set of cultural beliefs held about each species and examines the ways in which those beliefs get in the way of us knowing the real people we meet. During one funny sequence, a yak constantly praises an elephant’s memory in between reminding her of all the things she doesn’t remember, ending with, “I wish I had a memory like hers.” It’s played for laughs, but even this low-key scene reinforces that everyone in Zootopia has preconceptions and prejudices, even if they don’t recognize them or see them as harmful.

And the film doesn’t wrap everything up neatly. To take on that weighty message and then have everyone resolve their issues and be happy together would be a cheat, what people call a “Disney ending” in an unflattering way. Zootopia doesn’t take that easy way out. There’s a charge that is spoken to the people of Zootopia, but also to everyone in the audience, that life is messy, but we all have to get along. It’s a great speech that leaves you with a sense of hope about the world (that is one of my weaknesses, another reason I love this story).

The story structure is well done, too, harkening back to two of Disney/Pixar’s recent films, Wreck-It Ralph and Monsters University. There are no spots where the story drags, and the character journey feels more complex and authentic than I can remember since (and maybe including) those two movies in the Disney canon. It feels a little non-traditional, but it’s actually Nick’s story nested inside Judy’s story (from a character standpoint). Nick has the character movement in the first part while Judy is the agent of change; he then serves as the agent of her change in the second part (foxes are faster than bunnies sometimes).

And the animation…my goodness. The train ride to Zootopia is breathtaking, showing off not just the animation but the thought put into the world. We’ll be watching the crowd scenes and the fly-bys of the various towns for the minute details the animators have put in there. One article I read claims that every character who appears has a name and a story; I’m not sure if this applies to the crowd scenes, but they all look distinct enough that it’s possible. Disney used a new technology here called Keep Alive that keeps the background items in motion to make them seem more real. Look at the trees in the background: the leaves are in constant motion, like real trees. It’s a small effect but adds so much to the realism of the film.

Not only the background, but the foreground: the expressions on the characters are well done throughout. It’s a joy to watch characters who aren’t interacting because they’re still engaged in the scene. In the famous sloth scene in the DMV (which was funny in the trailer but is also surprisingly character-revealing), it is great fun to watch Nick and Judy react to the sloth and each other.

There are lots more things to love about the movie–the well-meaning parents saying terrible things–but I only have so much time. So one last thing: Zootopia’s hero is a female bunny. Her drill sergeant and at least one of her fellow police officers are female, as is the deputy mayor. Judy’s place in the police department is never questioned because of her gender–in fact, it’s never even so much as mentioned. And Judy is proudly front and center on all the merch for the movie. Somewhere Rey and Black Widow are thinking, “Why not me?”

The furry fans I’ve talked to have all loved Zootopia. With the worlds and concepts we have loved for years, Disney has made something on a scale that many of us dream of but can’t possibly afford–and something really good. Of course they didn’t make this for our fandom. But it feels like it was made by people who love this kind of story and aesthetic as much as we do. We’re all excited by its success, not just because selfishly we want to see more stories in Zootopia, but because it means other people are appreciating what we love, and what fan doesn’t want to feel that?

It’s been a while since I got that feeling of wanting to go live in someone else’s made-up world. I make up enough of my own these days. But I’d love to go live in Zootopia, for all its problems. And I can’t thank the good people who made it enough for that feeling, for justifying all of our excitement and anticipation. We were at Disneyland recently and attended the World of Color show, which ended with the song, “Forever Young,” and more than anything in the parks, this movie gave me that feeling. But it didn’t just deliver childlike wonder; it also evoked a great appreciation for the craft of the movie and the intent, for people trying to make the world better through story.

Also: The fox was great. But I loved the bunny, too.

This entry was posted in Uncategorized and tagged disney, furry, movie, zootopia. Bookmark the permalink.